The series of tariffs imposed by the United States on Chinese goods has impacted both U.S. and China-based Amazon vendors, but U.S. sellers are taking a bigger hit to their sales, according to e-commerce analytics company, SellerMotor. The gap has widened since the round of tariffs on Chinese goods announced in the summer of 2018 by the Trump administration.

Founded in 2016, SellerMotor  provides data and ad analytics about Amazon and an automation platform for sellers. For its research, the company analyzes data from 568 million SKUs, or almost all the active products and brands on Amazon’s U.S. site.

For this particular data set, SellerMotor analyzed 480,000 SKUs from Chinese sellers and 17.9 million from U.S. sellers. 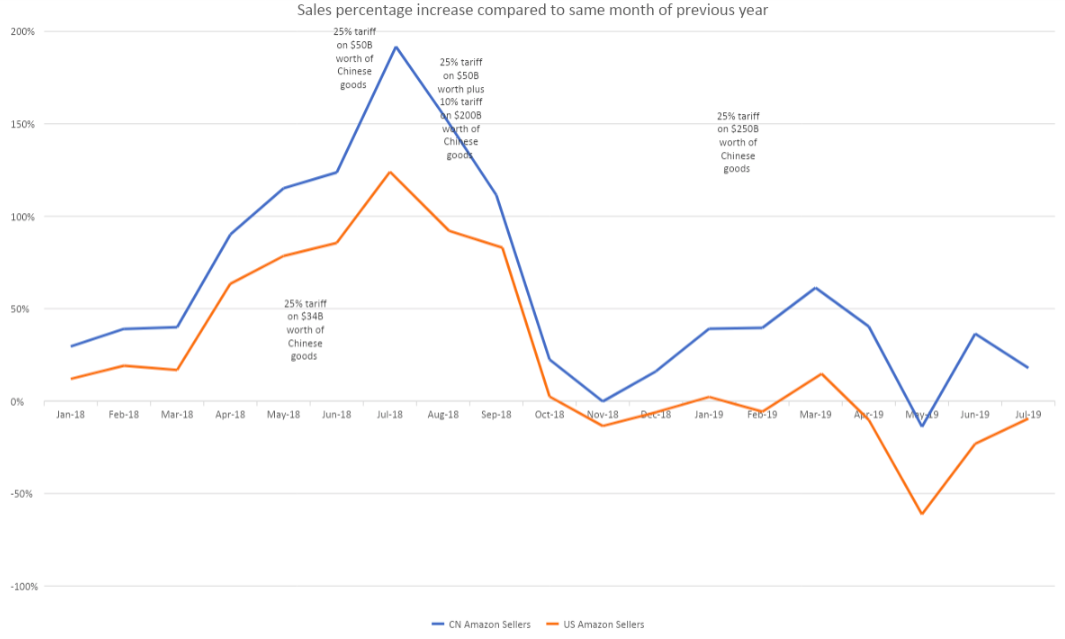 According to SellerMotor’s data, U.S.-based Amazon sellers have seen their year-over-year monthly sales decrease every month since November 2018. By March 2019, when a 25% tariff was placed on $250 billion in Chinese goods, Chinese vendors’ year-over-year sales grew by 61%, but U.S. sellers saw their sales decrease by 3%.

While many U.S.-based Amazon sellers also get their supplies from China, Chinese sellers have better control over their supply chain and closer relationships with their suppliers (in some cases, even equity partnerships), allowing them more flexibility, SellerMotor COO Sibao Chen tells TechCrunch. These deeper ties give vendors the leeway to negotiate things like smaller batches of products when necessary. As the tariff war forces smaller competitors out of the market, having more control over the supply chain lets these sellers quickly step into the gaps they leave behind. “Whoever is quick to grab these fragments will become even larger in size, because the market is there and that can help with growth momentum for the largest companies,” Chen says.

Chen adds that the way many Chinese e-commerce sellers organize their operations may also give them an edge over U.S. sellers. The company currently has about 60,000 clients in China and launched in the U.S. in June.

“I have been talking to a lot of U.S. and Chinese clients and the way that these Chinese clients are organized is that usually for each product group. So if there is an electronics company selling iPhone charging cables and also headsets, each of these product groups would probably have two to five people running the thing, like a mini-company, and they are organized, incentivized and almost completely independent within their group and given a lot of autonomy,” Chen says. “This is a very common form of organization within the Chinese retail and e-commerce industry and this is something we believe could have given them an edge in terms of the speed that they react to external impacts such as the tariffs.”

It’s time for you to put all of your focus on your product
and let us handle everything that’s outside the box.